By hannah Liberman1 August 2022No Comments

Stanley was always extremely independent, remaining at home alone after his wife had passed. He liked to stay active and was generally able to manage things around the house, with the help of a few care hours a week.

In recent visits, Stanley’s daughter Kate started to see a change in her dad, he was walking more hesitantly and she was worried that he could fall while alone in that big house. Kate decided to consult with her father’s home care agency who had recently onboarded Sensi, and they suggested that this could be the perfect fit for her dad, allowing him to remain independent while notifying Kate and the agency of any changes in dad’s state.

Kate felt that her father needed more care, and that his physical condition had been declining for some time. Each time she would bring it up with her father, he would dismiss her worries and say he was just fine the way he was.

After being installed, Sensi’s system quickly began to pick up instances of Difficulty Performing a Task and Physical Distress. These began to occur more often as time went on, and Sensi’s system recommended a medical review. While Kate tried to convince her dad to go for a check up, Stanley remained reluctant.

After several months of this back and forth, Sensi’s system picked up a Fall and a Call for Help. The home care agency was able to get swift help, and Kate was finally able to convince her dad to go see his doctor. Beyond treating Stanley for the fall-related injuries, Kate explained her father’s decline and the difficulty Sensi’s system had picked up to the doctor. He decided to send Stanley for further screening, and discovered that Stanley had early-stage cancer. 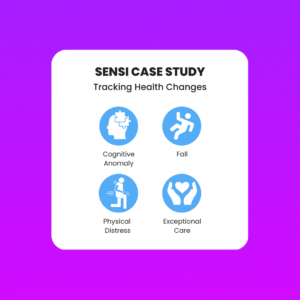 Many older adults are not receiving the amount of care that they need, and without accurate data, a decline in their health can go unnoticed. This decline is often not just the outcome of aging, but rather belies an underlying cause such as the onset of disease.

Through Sensi’s presence, the client’s agency and family were able to pick up on a trend of decline, and seek medical help in order to identify its direct cause. This led to an early discovery of disease, and a direct impact on the client’s health and wellbeing.